Before and After: Antique Doors Become Garden Bench

Last October, I was gearing up to build a large piece of furniture that this post will not be about.  However, I was out scouting for antique doors for it, and happened upon these free Craigslist doors.  (Picture isn't mine, I stole it from the ad).  There was a whole pile of doors, more than 10 of them, and I ended up going home with four and half of a door, even though I'd only needed two for my original project. 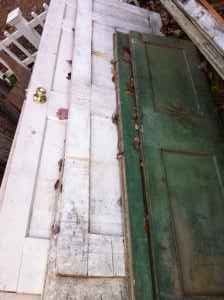 Once the other piece of furniture was built, I was left with the two green doors and 1/2 door that I couldn't pass up originally, even though I don't like green.  They were an odd size, not full size, and matching, and I really loved them.

Nine months passed and the green doors sat in my grandparents' basement, newly painted with a different green I'd chosen for them because I did have an idea for them that never came to fruition.  My grandfather, busybody that he is, hatched an idea for the doors since he'd lost faith that I'd ever use them.  He also had some leftover wood from another furniture project of mine from 2010. 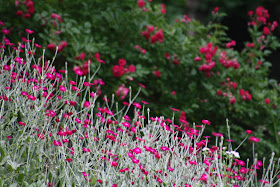 Meanwhile, my grandmother loves to garden, and recently started picking different places in the yard to sit and enjoy her gardens, and my grandfather wanted to make her a bench, so I let him have the doors and a couple days later, this is what he made: 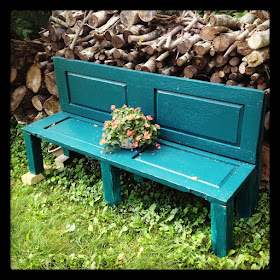 Old doors have new life as a garden bench.

(January 2018 update: This bench has been pinned on Pinterest more than 40,000 times!  Thank you to all who share this lovely bench.  Unfortunately two trees fell on it in a wind storm last October and so the bench is no more.)